San Pedro River is a surprising stream of history, recreation 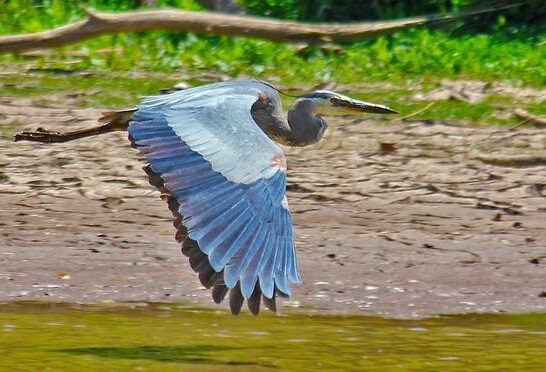 Roger Naylor | Special for The Republic

Everything about the San Pedro River comes as a surprise.

Start with its direction. The San Pedro is one of the few rivers in the world that flows north, traveling from Mexico across southern Arizona to join the Gila River. It creates a slender forest, a cool shady corridor through inhospitable desert. The San Pedro is lined by beaver dams and cottonwood trees and also by ghost towns, Spanish presidios, ancient petroglyphs and the bones of woolly mammoths.

“The San Pedro River supports some of the richest wildlife habitat in the Southwest,” says Laura Mackin, bookstore manager at San Pedro House. “This river of life provides resting places for millions of migratory birds and year-round homes for many kinds of plants, fish, reptiles, birds and mammals. In addition, the river supports one of the largest cottonwood-willow canopies remaining in Arizona and is one of the last free-flowing rivers in the Southwest.”

Such a vital waterway required special protection. The San Pedro Riparian National Conservation Area was established in 1988. The Bureau of Land Management oversees the nearly 57,000 acres of public land between the Mexican border and the town of St. David in Cochise County.

The San Pedro is one of only  two riparian national conservation areas in the country. You don’t have to go far to find the other because it’s also in Arizona. Between Safford and Clifton, the Gila Box Riparian National Conservation Area safeguards 23,000 acres fed by four perennial waterways.

Start your exploration at San Pedro House. The historical ranch building has been restored by Friends of the San Pedro River, a non-profit organization dedicated to the river’s conservation. Hunkered in the shade of massive cottonwoods, San Pedro House serves as visitor center, bookstore and educational hub for the conservation area.

Grab a map and follow paths through the meadow of waist-high grass to the river. A network of trails traces the bank in both directions, skirts an oxbow (an old river channel), loops around Green Kingfisher Pond and then ambles back across the grasslands of the upper floodplain.

This section of river flows year-round so it is excellent bird habitat. The conservation area supports more than 350 species of birds, not to mention 80-plus species of mammals. Recognized by the National Audubon Society as a Globally Important Bird Area, it attracts birders from all over the world, binoculars in hand.

Members of Friends of the San Pedro River lead river walks every Saturday and guided bird tours at Sierra Vista’s Environmental Operations Park on Sundays. They also conduct monthly history tours and additional bird walks along the river. All outings are posted on their website.

“In a matter of a few feet, you can go from a desert zone to a riparian zone and can experience all the sights, sounds and smells associated with water in the desert,” Mackin said. “Or you can step back in time and follow in the footprints of 13,000 years of human occupation in the river valley. The San Pedro River offers something for everyone looking for a unique experience in southeastern Arizona.”

Although Cochise County has been populated by some very rough customers — folks named Earp, Clanton, Cochise and Geronimo — the hardiest lot came along 13,000 years earlier. The Clovis people lived at the end of the last Ice Age and survived by hunting bison, mammoths and saber-toothed cats with nothing but sharpened-stone spear points.

Two prominent spots along the river have yielded valuable information about the Clovis Paleo-Indian culture: the Lehner Mammoth Kill Site and Murray Springs Clovis Site. Excavations at both have uncovered tools, bones and fire hearths that have proven crucial to radiocarbon dating. A ⅓-mile loop trail at Murray Springs offers exhibits on life at the end of the Ice Age. It’s slightly different than what’s portrayed in the animated movies.

Two of Arizona’s three presidios — Tubac and Tucson — are surrounded by towns and seem a bit lost in a modern world. The third feels as lonely and isolated as when it was established in 1775 on a bluff overlooking the San Pedro River.

Presidios, or forts, marked the northernmost expansion of New Spain into the New World. Trained in traditional warfare, the Spanish troops who occupied the presidio were unprepared for the guerilla tactics of the Apaches. The soldiers suffered numerous casualties and abandoned Santa Cruz de Terrenate in 1780 before it was completed.

A stone foundation and erosion-gnawed adobe walls are all that remain of the fort, which can be reached via an easy, 1.5-mile trail.

With vast quantities of silver being mined in Tombstone, Millville sprang up in 1879 on the banks of the San Pedro to process the ore. Water was required to power the stamp mills that pounded away ’round the clock. Yet within a decade, both Millville and Charleston, the community on the west side of the river where mill workers lived, were ghost towns.

A short trail leads past crumbling foundations and interpretive signs to a site adorned with ancient Native American petroglyphs.

Unlike the more ravaged Millville, Fairbank, a transportation hub in the 1880s, is a ghost town with meat on its bones. A half dozen structures including a large mercantile building, a schoolhouse and a few homes huddle amid riverside mesquite groves.

Fairbank defied the boom/bust cycle of neighboring towns and hung on for nearly a century, but by the mid-1970s the last resident had packed up.

The BLM restored the schoolhouse and stabilized other buildings. Fairbank Historic Townsite is open daily for self-guided tours. Trails lead to the river and a hilltop cemetery. The schoolhouse, serving as museum and visitor center, is open Fridays through Sundays, staffed by volunteers from Friends of the San Pedro River.

“Groundwater pumping is depleting the aquifer that supports the river’s surface flow,” Mackin said. “Groundwater is the river’s lifeblood. One only needs to look at the Salt, Gila or Santa Cruz rivers to see what happens when this lifeblood is depleted.”

Fortunately, the San Pedro has lots of friends watching out for it.

From Phoenix, take Interstate 10 east past Tucson to State Route 90 and go south toward Sierra Vista. San Pedro House, staffed by members of the Friends of the San Pedro River, is 6 miles east of Sierra Vista.

Fairbank Schoolhouse will be the site of Fairbank Day on March 12. There will be docent-led walks to the old cemetery and other historical sites, live music, food and a re-enactment of the Fairbank train robbery. In 1900, the Alvord-Stiles gang’s attempt to rob a train guarded by lawman Jeff Milton met with deadly results. Free; donations are accepted.

The conservation area is administered by the Gila District of the Bureau of Land Management. Contact the office or go to the website for activities, directions to all of the river’s access points and more.