Agua Prieta is a quiet, thriving city directly across the border from the U.S. from Douglas, and is a popular shopping destination for locals and visitors alike. You can easily access the shopping district by walking across the border.

The town’s origins date back to its proximity to the railroad constructed in the late 1800’s by the Phelps Dodge corporation to transport copper to the United States from its mine in Nacozari, Mexico. It was originally established in 1899, but did not become a municipality with its current name until 1916.

Although the town has not been around as long as most Sonoran municipalities (which were typically founded centuries ago), it has a storied history. Mexican presidents Plutarco Elias Calles and Lázaro Cárdenas both lived in the town, and it played a part in the Mexican Revolution – in fact it was once attacked by the forces of Pancho Villa (who famously rode his horse up the staircase at the Gadsden Hotel in Douglas).

Located a short drive from Bisbee, Naco is one of two gateways to the Rio Sonora region. The town of Naco, Sonora was established in 1901 after originally having been settled by Nahua and Opata Indians. The name comes from the Opata language.

Naco is a small but popular shopping area for southern Arizona residents. Many take advantage of it’s proximity and ease of access to obtain prescription medications, food and beverages, as well as high quality but relatively low cost dental care. The principal economic activity in the area is manufacturing with several maquilladora firms operating in Naco. Agriculture is also important with large cattle ranching operations in the area.

For both the Douglas and Naco border crossings, you can park in the U.S. and cross into Mexico by foot, or you may also cross by car. You are not required to show any identification to enter Mexico, but will need it for re-entry to the United States. Upon re-entry, you will be asked to declare international purchases and there are limits on the number of certain items you can bring back. For more information about visiting Mexico, visit the U.S. State Department website. 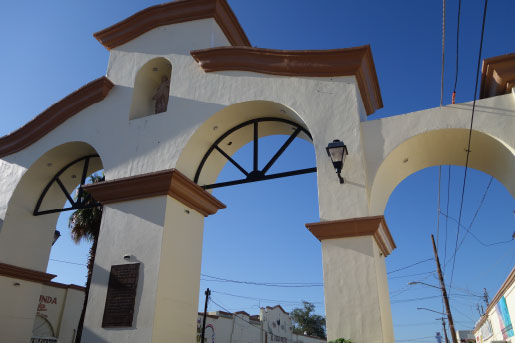 Sign up for the Explore Cochise Newsletter for year-round ideas.

GET YOUR FREE ATTRACTIONS MAP

You can download or we’ll mail you a FREE Explore Cochise Attractions Map to help you plan your next trip to Cochise County.