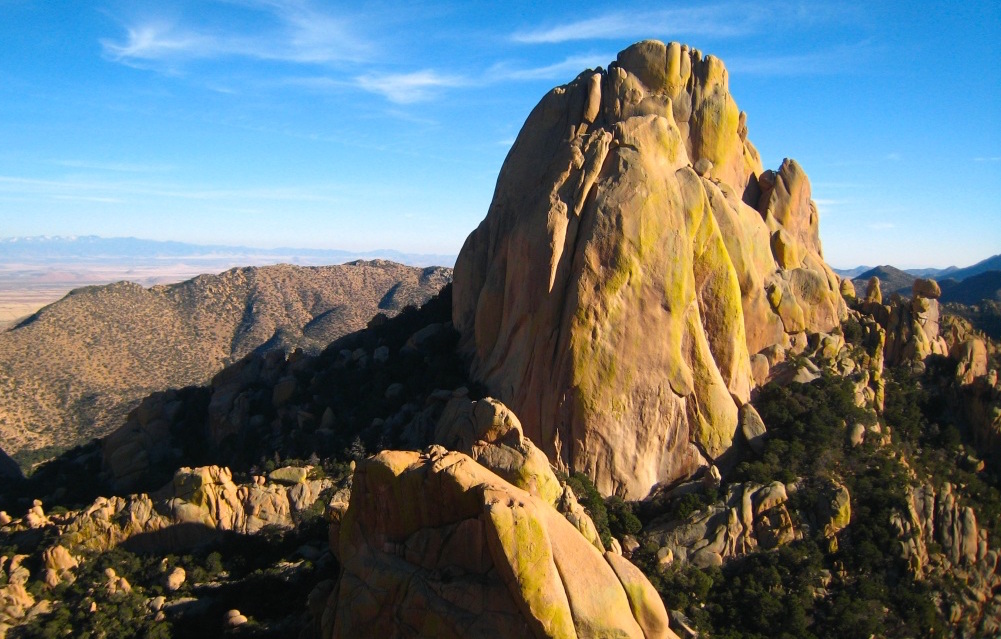 Cochise Stronghold is a jagged ridge of granite peaks and spires that rise out of the remote Dragoon Mountains in southern Arizona. About 1.5 hours southeast of Tucson, this spectacular spot offers a lifetime of remote climbing adventures. Spend a day on the massive granite domes and you’ll see why the Chiricahua Apache made this place their stronghold.

Local Vibe: Like all great desert climbing destinations, the Stronghold (as locals call it) is home to the elusive desert rat climber. But good luck finding one…they are more than likely hunting offwidth, flares, slab, and gnarly trad routes out in the hinterlands. Due to its remote location, the Stronghold mostly draws climbers looking for rugged approaches and solitude.

Climbing Style: If multi-pitch trad and mix climbing is your thing, you’ll be psyched with the Stronghold. The style of climbing ranges from scenic cruises up highways of jug plates to glass slabs that will make you question your life decisions. You can also find single pitch routes at Isle of You, Vineyard Cove, or Zappa Dome.

Avoid The Crowds: What crowds? It’s not uncommon to climb at the Stronghold on a perfect weather weekend and not see another soul.

Watch Out! Keep your ears and eyes open for rattlesnakes, which call this area home. Also, don’t be surprised if you run into border patrol agents. They may stop you if they think you’re up to no good, but there’s normally no reason for concern.

Local Pet Peeve: It’s hard to get the locals peeved when you can’t find them. But if you should happen upon one of these desert creatures, keep in mind that they can become very ornery and ill-tempered if you are toting a portable stereo, get tangled in their ropes, or are generally unprepared for the remote adventure climbing. Deep down, they are nice people though.

Native History: The Stronghold was an ancestral home to the Chiricahua Apache. The name Cochise came from one of the greatest Apache war chiefs, known for having survived many battles and physical wounds. Cochise and his band of warriors used the walls of the canyon as a hideout to evade capture by U.S. forces after being falsely accused of kidnapping a child from a ranch. Cochise and his war tribe remained unconquered and signed a peace treaty in 1872. Cochise is said to be buried somewhere in the Cochise Stronghold area, but the location remains unknown.

Camping Beta: This beautiful area is separated into two sides of the range: East and West. There’s one U.S. Forest Service (USFS) campground on the east side, which has toilets but no water. Both sides offer primitive dispersed camping on USFS land, but don’t expect to find toilets or water. Look for spots that are already established in order to minimize your impact, and pack out whatever you pack in—including human waste, which doesn’t biodegrade in desert soil.

Rest Day Beta: About an hour south there’s the funky old mining town of Bisbee, which is now filled with a unique collection of artists and shops. You can also find decent food here, at places like Bisbee Breakfast Club and a solid dinner spot called The Quarry. Or check out the historic town of Tombstone (home to the famous O.K. Corral), which is only about an hour from the east side.

Pro-Tip: “Recreate with respect and practice good Leave No Trace ethics. The desert is highly susceptible to impact, and it is our responsibility to protect the living biology to ensure access for future generations.” —Aaron Mike, local climbing guide and Access Fund Native Lands Ambassador