12 Things to Do and See in Bisbee 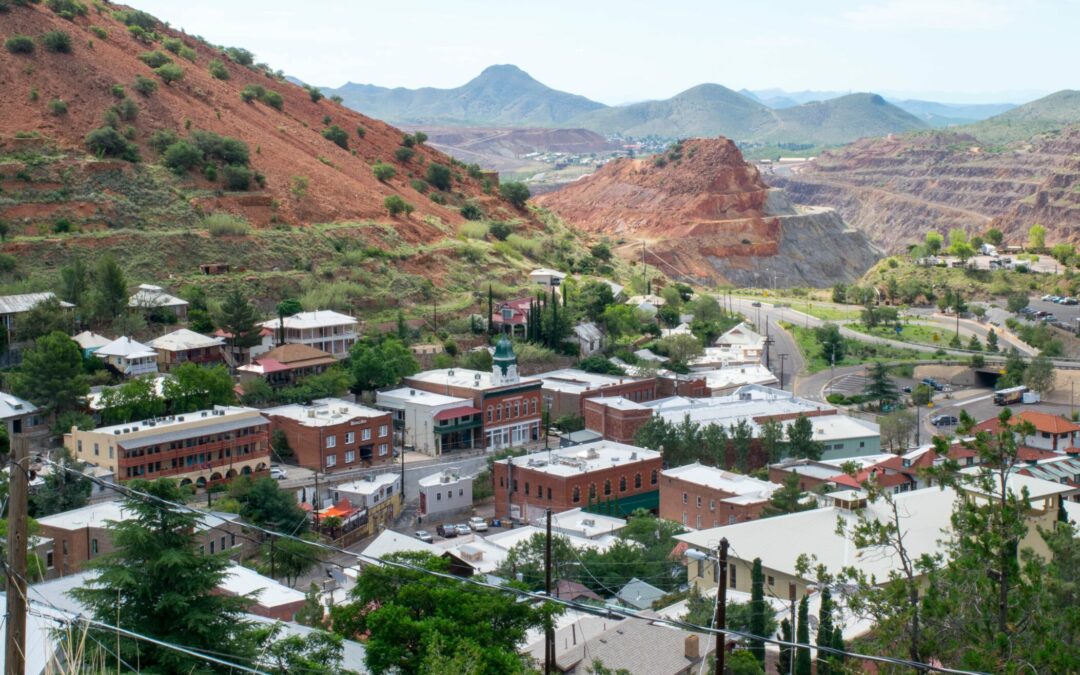 Jackalope Ranch is hitting the road this summer — and you’re coming, too. Well, sort of. With Going Places, our writers recommend the best things to do and see during your travels.

A picturesque tiny town with a history as rich as the mine that made it famous, Bisbee has a storied past every bit as present as the array of artists and aging hippies who have turned this two-lane stretch into a tourist destination.

Founded in 1880, the town, known for its gold, silver and copper mining, was named for a financial backer of the Copper Queen Mine, Judge DeWitt Bisbee. It was incorporated over a hundred years later and is now part of the larger Cochise County. The mine is no longer operational. About 5,500 people call this small mining town home today, included nationally recognized comedian Doug Stanhope.

Hidden in the hills just north of the Mexico border, Bisbee is 207 miles from central Phoenix (82 miles southeast of Tucson) — about a three-hour drive south courtesy of Interstate 10 East.

After opening in 1877, Bisbee’s most lucrative copper mine was closed by Phelps Dodge in the mid-1970s before being re-opened for tours in 1976. The Queen Mine tour ($12) takes the aspiring and interested below-ground for a look at what mining life was like in the 18th and 19th century, led by retired miners themselves. Tour-goers wear headlamps, helmets and yellow slickers for this adventure under the Mule Mountains.

The Old Bisbee Ghost Tour ($13) isn’t just a walkabout around the haunts of old. Led by a team of “Ghost Hosts,” the tours include a variety of options: like a haunted pub crawl ($20) or a ghost hunt ($40). Expect to explore spirits in the Copper Queen Hotel and along the brewery gulch. Tours vary from weekly or daily to monthly three-and-a-half hour events (the hunt). Reservations are required.

Separate trips to the Bisbee Mini Museum of the Bizarre ($3) take those with iron stomachs and wide eyes along exhibits featuring “a shrunken head named Fred,” the death mask of the notorious John Dillinger, and a mold of Bigfoot’s, well, foot.

Filled with vintage artifacts from the last century, modern art and western depictions, and jewelry boasting Bisbee Blue, the former copper mecca is a must-go for anyone looking for a quaint — yet quirky — weekend getaway.

If a mid-week reprieve is in the cards for you, avoid Tuesdays and Wednesdays. Many shops are closed and the streets seem devoid of both locals and in-the-know tourists.

At other times during the week, though Main Street is a bustle with vendors and shoppers of both the kitschy and the cute. Upper Main is home to Finders Keepers Antiques and Copper City Inn, while Mid-Main hosts the Bisbee Grand Hotel and its adjoining bar, surrounded by galleries and gold and silver jewelry makers.

Lower Main contains the bulk of the town’s great, if not populous, antique troves — many of which are side-by-side. Both Nostalgia and Bisbee Antiques pay homage to the treasures of old: from dishes and radios to silver and furniture. Peddler’s Alley, a hidden offshoot of the main drag, has a rotating membership of street vendors selling coffee to copper bracelets on any given weekend day.

For early birds looking for a cup of coffee as the sun rises to vegan and non-vegans alike, Whyld Ass Coffee Shop is a friendly — and filling — breakfast and lunch destination. The shop opened late last year by Keith and Ryan Whyld, former downtown Phoenix residents who were married in Bisbee earlier this year. (The town recognizes gay marriage, although the state does not.) The all-vegan menu includes both breakfast and lunch all day. Try the rosemary “biscuits and gravy” topped with southern cooked kale ($6) or the mean aubergine sandwich ($9.50) with baked eggplant and walnut parmesan on rye. The duo also makes their own organic juices and smoothies ($5.50) and non-alcoholic mojitos — a combination of grapefruit, melon, cucumber and mint with a pink himalayan salted rim.

Café Cornucopia is the best place to grab a bite without leaving the center of things. The homemade quiche ($8.95) rotates daily, as does dessert — imagine everything from brownies the size of one’s face to delectable carrot cake worthy of a city bakery. Sandwiches will run you anywhere from $7.95 to $8.95 with salads and soup combinations at a similar price point.

For a mid-day or evening pint, try Old Bisbee Brewing Company. Located on the aptly named Brewery Gulch — within a stone’s through from Whylde Ass and neighborhood watering hole St. Elmo, the century-old brewery offers a variety of ales like Mountain Lime Lager and Copper City Ale. Pints from $4.50 (16oz.) to $5 (20oz.); growlers are available to go for $4.

Chef and owner Rod Kass changes Cafe Roka‘s evening-only seasonal menu weekly, with starters ranging from $4.50 to $9.50 and full four-course dinner entrees (soup, salad, sorbet and entrée) from $16.50 to $23.50. Summer menu features dishes like roasted quail stuffed with prosciutto, cashews and vegetable brunois in a pomegranate glaze, and a mushroom, pistachio and fennel tart served with couscous, wheat berries and a roasted tomato vinaigrette. The two-story dining room features live jazz every Friday night not far away from the full bar.

Your friends and every guide book in town will suggest staying at the Copper Queen Hotel. And you should, at least once. After all it’s a historic town landmark, completed in 1902, originally finished with Tiffany glass and boasting a sign that can be seen from the road. It’s also haunted (allegedly or not) and takes great pride in this, so be warned. The 52-room hotel includes a cafe and saloon with a large front patio. Rooms will set you back between $89 and $197 depending on size and height of season.

Looking for quiet or quaint? Head to Upper Main, where the Copper City Inn sits directly across the two-lane road from Tombstone Canyon Inn, just down the street from the Inn at Castle Rock. These three have a distinctly more bed-and-breakfast vibe: less destination, more relaxation. Rooms at the Copper City Inn are on average $125 to $150 a night and come with their own private balconies.

Arguably the most unconventional and certainly the most hipster friendly is The Shady Dell. The recreational trailer park is situated a few miles outside of Old Bisbee proper and features ten airstreams from the late 1940s through the late 1950s. Each is decorated in their own particular brand of kitsch, like the 1947 Tiki Bus with its “Polynesian Palace” theme or get the “royal” treatment in the 1951 Royal Mansion (the park has another “Mansion”-type trailer, too) which feature a breakfast nook and leopard carpeting to outfit its party style. Rates vary based on season and availability, usually between $88 and $145 depending on length and amenities. Making reservations months in advance is not only encouraged, it’s usually a necessity.

1. Because it’s smaller and more manageable than Tucson, and more overtly eclectic. You can’t beat that quintessential quirky small-town charm.

2. Because it’s rich in both history and art, providing a nice alternative to other day-trip staples like Jerome, Sedona, and nearby Tombstone.

3. Because the last time it reached triple digits was in 1990. (On average June is the hottest month, but the summer tends to average out between 84 and 92 degrees.)